The Apollo missions let a small handful of brave men walk on the moon, but what if we could all go? That very question may have been what led Walt Disney, Wernher Von Braun and Howard Hughes to put together the Moonliner passenger rocket concept. The idea was born of a partnership between the three and vision of might be possible in the then far off year of 1986. The original 38 foot scale replica which stood atop the TWA World Headquarters from 1956-1961 now resides at the Airline History Museum. 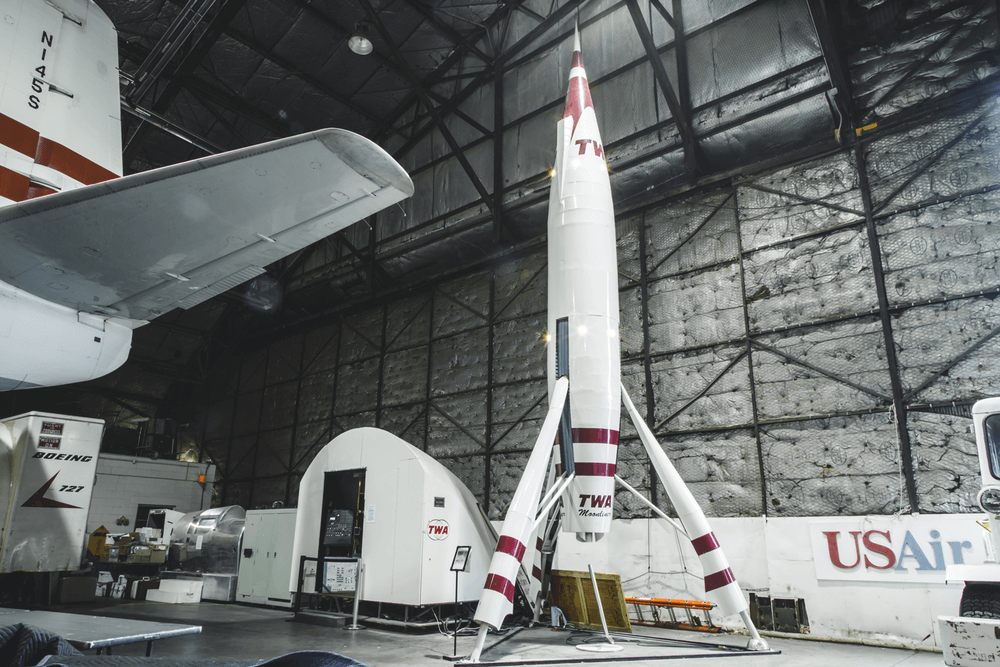 Designed by John Hench, one of the original Disney Imagineers, with the help of the famous rocket scientist Wernher von Braun. The Moonliner was meant to depict what a moon going commercial vehicle would look like in the then distant year of 1986. The landing gear that would have been retracted into the lower sides of the Moonliner were said to resemble to sleek lines of the Lockheed Constellation. The propulsion would have come from an on-board atomic reactor ensuring that Moonliner would have a safe and steady power supply for the trip.

From 1955 to 1962 the TWA Moonliner was the center piece in Disney’s Tomorrowland. At 76 feet tall the Moonliner was 8 feet taller than Sleeping Beauty’s Castle making it the tallest attraction in the park. Even at this enormous scale the rocket was still only a roughly one third scale replica of the proposed 200+ foot Moonliner.

The Moonliner was accompanied by Disney’s Rocket To Moon presented by TWA ride which gave visitors a taste of what it might be like to take a ride around the moon and back. The ride featured a round room with two round screens at the top and bottom of the circular theater. The bottom screen showed visitors the earth as they blasted off and the top showed the moon as it grew ever larger during their trip around it. In later years this would become the Flight to the Moon presented by McDonnell Douglas and later still Mission to Mars.

TWA dropped its corporate sponsorship and Rocket to the Moon ride at Disney in 1961. The Douglas Aircraft Company stepped in and took over the sponsorship in 1962. Now that TWA was no longer sponsoring it was time for a new color scheme. The white body stayed, but the TWA strips went. A blue vertical stripe now ran the length of the body with the name Douglas spelled from top to bottom. Color scheme remained this way until 1967. At that time the Moonliner was removed from Tomorrowland and moved to a storage site where it was last seen in 1981.

Although the original 76 foot tall Moonliner has been removed from Tomorrowland a replica of the original can still be found in Tomorrowland. It can be found sporting its original bright red TWA stripes against its sleek white fuselage. Although It no longer carries its TWA marking at its base it has been replaced with the name Moonliner

In 1956 Hughes had a one-half scale model of the Disneyland Moonliner known as the Moonliner II placed on the southwest corner of the TWA Corporate headquarters. It stood ready for lift off until 1961 when the partnership with Disney ended and it was taken down. It was sold in 1962 to a local RV company ironically named SpaceCraft. The TWA logos and signature red paint and the now all white Moonliner was moved to Concordia, Missouri. It was placed near the south side of I-70 between St. Louis and Kansas City at the SpaceCraft Assembly plant.

The Moonliner spent 25 years outside with minimal maintenance until in 1997 a Columbia, Missouri attorney bought the Moonliner II and began the process of restoring it to its glory days of 1956 when it sat atop the TWA Building. The Moonliner II has now found a new home in the Airline History Museum where it can be seen standing tall with it’s original red TWA stripes aimed toward the moon it was destined to visit.

The Nicholson Group, a Kansas City, Missouri urban development firm, hired El Dorado Inc. in the start of 2005. El Dorado, a Kansas City based architectural firm was tasked with the restoration of the former TWA corporate headquarters on 18th and Baltimore. Furthermore the company would be also be responsible for creating a replica that would sit atop the building. The contract for the replica was given to The Bratton Corporation in early 2006. The new illuminated replica was installed on September 29 of 2006 in the same location as the original in the southwest corner. The former TWA headquarters was then leased to Barkley, a local advertising firm which moved into the building on Nov 14, 2006. The company also adopted a white silhouette of the Moonliner against a red background as there logo.