By the spring of 1986, Save A Connie, Inc. (SAC) was ready to move forward with the project to restore N6937C (37 Charlie) to a flyable condition.  After nine weeks and nearly 4,000 man-hours, SAC volunteers made this plane flyable again.  On July 15, 1986, Star of America left Falcon Field, headed for Kansas City’s Downtown Airport (MKC). The flight, accompanied by an escort aircraft, was completed without incident.  Crew members became convinced that the aircraft has a soul, because, in their words, “The further she got away from the junkyard, the better she flew!”

Once in Kansas City, the transformation from a drab, worn out bug sprayer to a beautiful ‘Queen of the Skies’ began.  Kansas City was probably the only place in the world that this transformation could have taken place.  It was a classic example of “the right time and the right place”.  There was a core of then current and retired TWA employees in Kansas City.  All disciplines including pilots, flight engineers, mechanics, hostesses, etc. were represented.  Had the members of SAC waited, it most likely would had been too late to find this kind of aircraft in restorable condition, or to salvage the parts needed from other Connies.  This talented pool of retirees, who knew these planes well, led the way.

After 18 months in the hangar at Kansas City Downtown Airport, the Connie emerged, resplendent in her new Save A Connie livery.  The Lockheed Constellation had been converted from cargo to passenger configuration.  In the late 90’s, employees from TWA’s Kansas City overhaul base donated a new paint job in TWA colors.  She flew the Airshow circuit for nearly 20 years,  where she was consistently regarded as ‘best in show’. Currently 37 Charlie is on static display while undergoing heavy maintenance with a goal of returning to the Airshow circuit.

The Star of America has been involved in television and movie releases, as well as several television commercials.  It was featured in the Arts and Entertainment documentary entitled First Flights, narrated by Astronaut Neil Armstrong, and the motion picture, “Voyager” released in the U.S. in 1992.  The Connie was also used for interior scenes for the movie, “Ace Ventura – When Nature Calls”, in 1995, starring actor Jim Carrey.  The Connie most recently appeared in “The Aviator”, which was the 2004 Martin Scorsese movie depicting the early years of legendary director and aviator Howard Hughes’ career, from the late 1920s to the mid-1940s starring Leonardo DiCaprio, Kate Beckinsale, and Cate Blanchett. 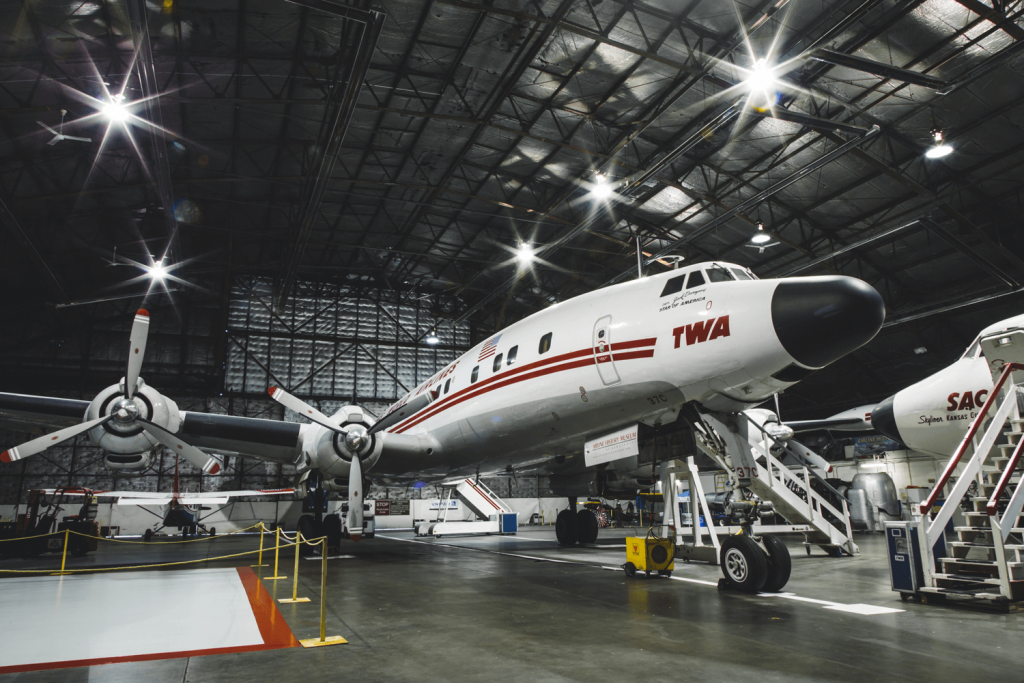 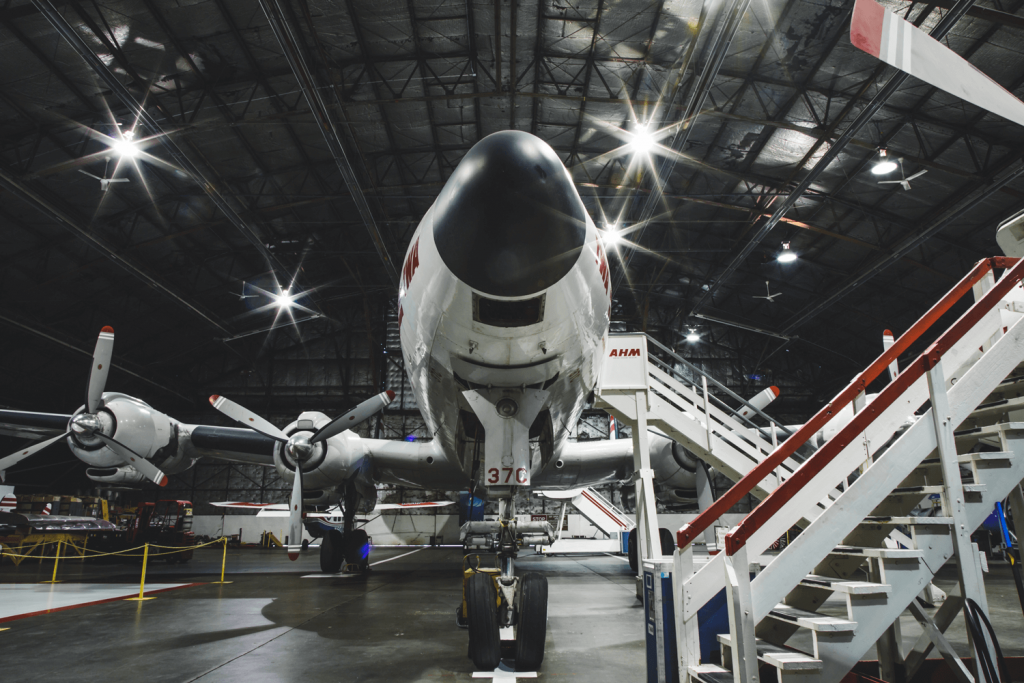 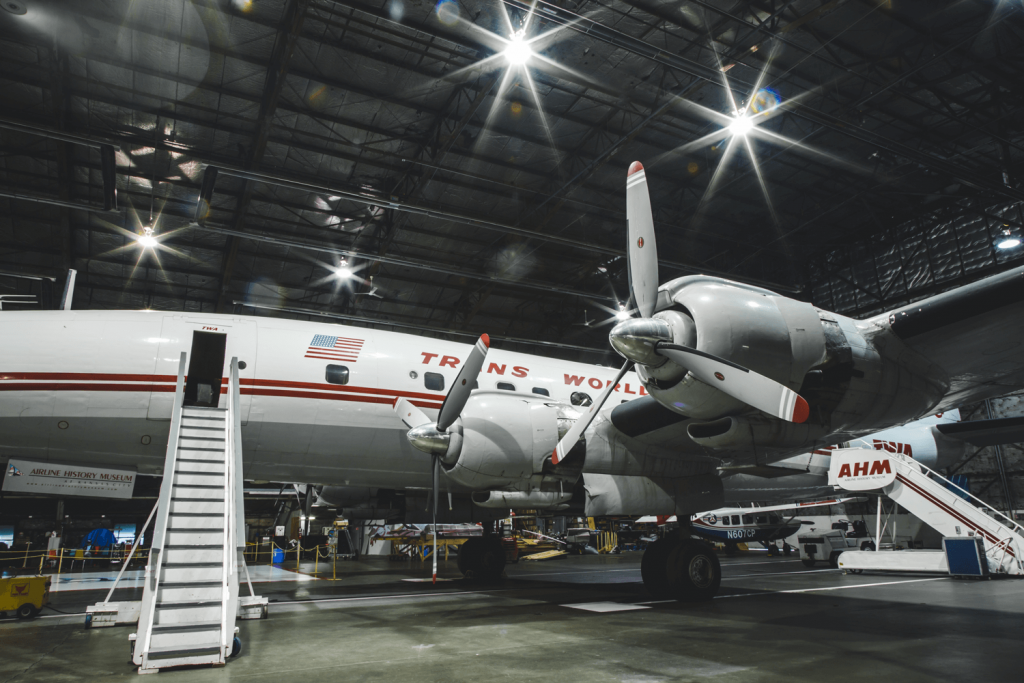 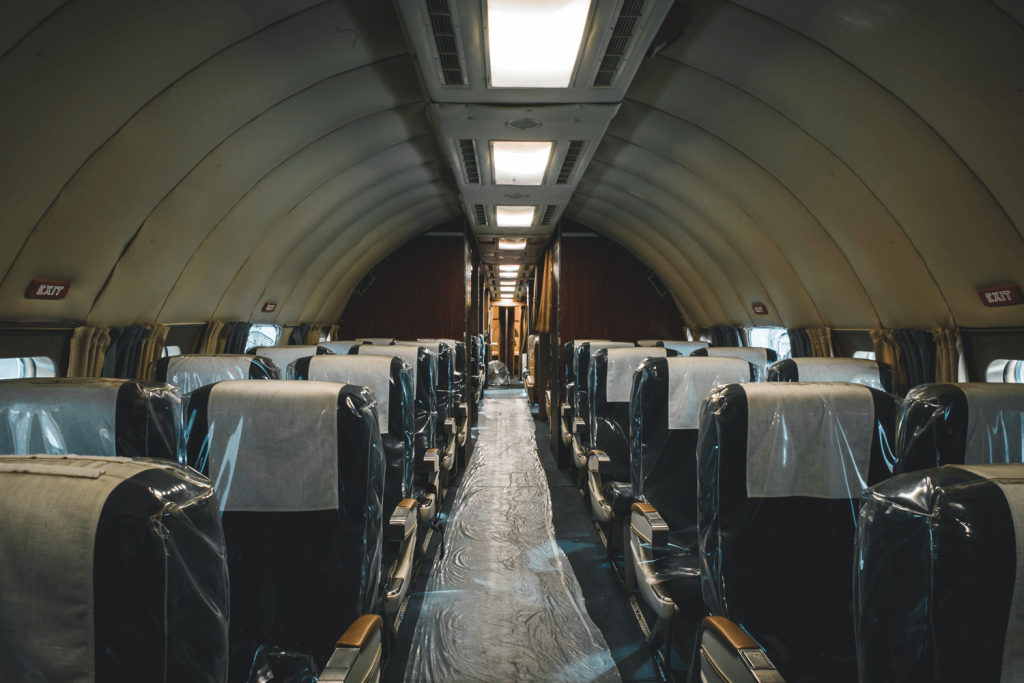 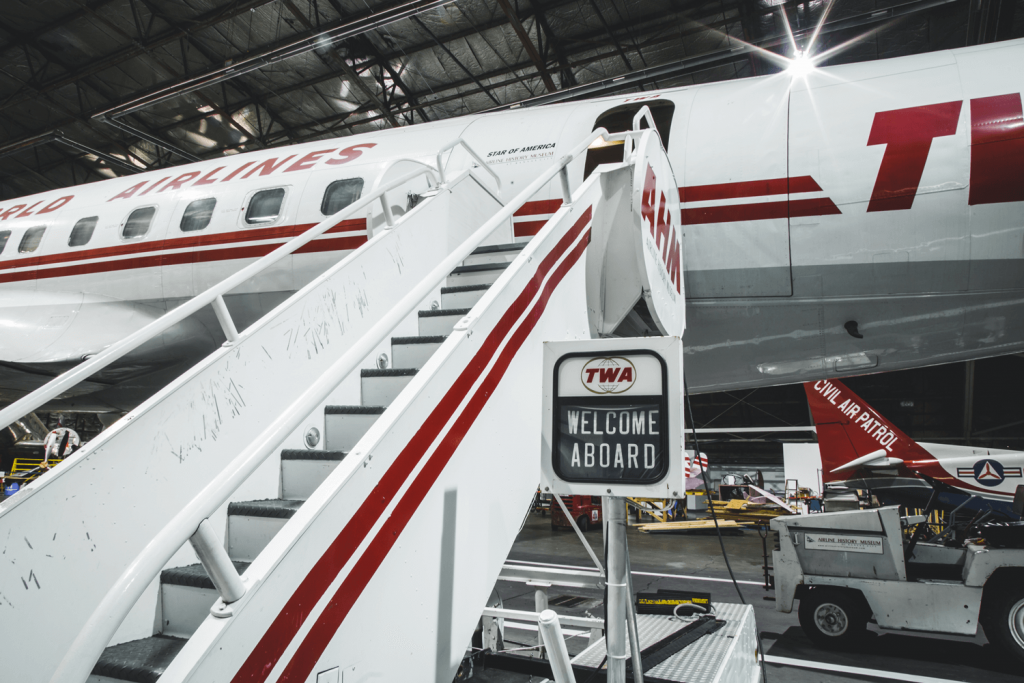 By Larry Denning
Adapted from a story by Dave Albright
Photos by Skip Gatschet
We visit the set of “The Aviator”,
the story of Howard Hughes,
in San Bernardino, CA

On Tuesday, the 21st of October, the Airline History Museum Lockheed Constellation left the Kansas City Downtown Airport for a flight to San Bernardino, California. The Connie’s job was to appear in scenes for a new movie about the life of Howard Hughes. As of this writing, the movie’s title is “The Aviator”. With a very well known director and a cast of famous actors, our Connie will very likely be seen on thousands of movie screens the world over, once this picture is released.

Several months ago, the Airline History Museum was contacted by a firm specializing in providing aircraft to motion picture producers for both static display and flying scenes. They had heard about our Lockheed Constellation and wanted more information about the current paint scheme and the availability of the aircraft. They were very pleased to learn that the Connie not only had a new paint job, but that it was in a very accurate former TWA livery. They felt it would be perfect for the upcoming movie production. A group of our Airline History Museum officers did a cost analysis on a round trip from Kansas City to San Bernardino and came up with some figures. A period of negotiations followed and it wasn’t long before a deal was signed.

Since the flights out and back could each be over six hours of non-stop flying, it was decided that extra crew members would join the normal two pilot and two engineer crew. Having three pilots, two Captains and one First Officer, would allow the pilots to take a break during the long flights. The addition of an extra Flight Engineer would not only help out during flight time, but the extra engineer could be utilized during any aircraft related activities required by the movie production crew. The two Captains were Skip Gatschet and Joe Orr, and they were assisted by First Officer Dave Albright. The Flight Engineers were Tery McMaster, Foe Geldersma, and Dick Gooch.

The Connie lifted off the Kansas City Airport, on time, at 10:00 am. At the controls were Skip Gatschet, Joe Orr, and Tery McMaster. The other three crew members were enjoying the view from the cabin. It was a beautiful day for a cross country flight. The sky was clear and the visibility was great for the entire 5 hours and 48 minutes from MKC to SBD. The Connie cruised at 10,000 feet above Wichita and Albuquerque, and over the continental divide. Then it was on to Prescott and Winslow. Shortly thereafter, the descent was made into the always busy Los Angeles basin. The crew reported amazing visibility and excellent sight-seeing for the entire trip. The Connie arrived at SBD a full 10 minutes ahead of the planned arrival time.

The San Bernardino airport was very busy, as the spreading fires in southern California were still burning out of control at this time. Fire bomber aircraft were using the airport as their staging area. There were numerous takeoffs and landings of various types of equipment including S1, P2, DC-4, DC-6, and DC-7 aircraft that had been modified for their firefighting duties. The sounds of all these round engines on takeoff had to be taken into consideration by the filming crews, especially during scenes with the actors speaking. The words “cut” and “action” were heard often.

Production company technicians “painted out” some of the lettering on the Connie. This was in keeping with their research on the way things were circa 1946. They sprayed on a water soluble white paint then coated it with wax to make it shiny. Among other changes, they painted out the “Super G” logo and took the “s” from the end of Trans World Airlines. A huge sunlight diffuser was constructed and hung over the Connie by a large crane during filming.

One scene involves a conversation between Noah Dietrich, Jack Frye, and Howard Hughes. In ailing health, Hughes is trying to secure financing because a recent accident has the potential of grounding the entire Constellation fleet. Scenes like this require hours of preparation and are sometimes shot from several different angles. After editing, this scene will be about one minute long, but required five hours to film. The huge former military hangar was painted white and the old TWA logo, complete with the “arrow”, was applied adjacent to the main doors. There were several vintage automobiles, a period fuel truck, 1946 costumes, and much attention to detail.

Besides the parts of the movie involving the Connie, there were plans to film several scenes wherein Hughes is flying the YF-11, one of his experimental aircraft of the time period. A mock -p of the aircraft was in the hangar and was used for the flying scenes with Hughes at the controls. In the photo of the mock-up, it’s interesting to see the abrupt changes in “scale” between the cockpit and the engines and wings. When a little “movie magic” is added later, the effect will be that of a real aircraft in flight.

Our flight crew members were assigned vehicles for transportation to and from the set each day. They were also provided meals, several times during the day, along with the rest of the production crew. At the end of the last day of filming, each crew member was given funds to cover their expenses. Upon their return to Kansas City, all six members of the crew donated their expense money back to the museum.

After several days, filming was complete, the sets were being torn down, and our crew was fueling the Connie for the long flight home. A dawn takeoff was set up for Saturday morning. The departure went as planned, and at sun-up the Connie was roaring down the runway and homeward bound. The aircraft performed beautifully and the engines ran smoothly. Oil consumption for the trip was surprisingly low, even considering the four freshly overhauled engines.

From a financial standpoint, this latest AHM movie making adventure was a great success. The flight crew, our maintenance technicians, and other AHM support personnel once again demonstrated the professionalism and “can do” attitude that will get us invited back again, when the next opportunity arises.